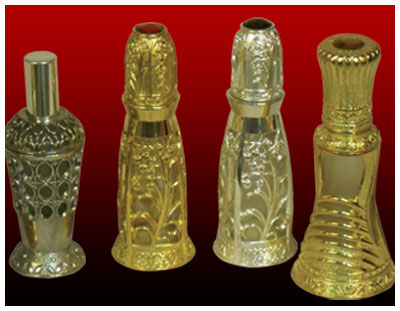 The fine art of making attar (an aromatic oil extracted from various botanical sources) is generally believed to have its origin in India-a belief based on archaeological excavations in the Indus Valley that revealed 5000-year-old copper stills used in the distillation process. Further evidence of the use of attar in ancient times is provided by the ayurvedic text Charaka Samhita, while the Gandhayukti-another text dating back to the Vedic period-lists attar ingredients and also offers recipes for various perfumes, soaps, mouth fresheners, talcum powders and incense.

However, it would be inaccurate to state that all attars and their derivatives had their beginnings in the Indian Subcontinent. Perfumes in one form or another have been used throughout history, across various geographies. The Holy Bible mentions three wise men visiting the baby Jesus with gifts of myrrh and frankincense, and there are records that perfumes were also much favoured by the Egyptians and the Romans.

Kannauj, situated on the banks of the Ganga-and once the seat of power of Emperor Harshavardhana-prides itself as the 'Attar City' of India. Before the advent of the Moghuls, distillers in the city used aroma-bearing substances like sandal, musk, vertiver, jasmine, and saffron to create perfumes. However, the range of such materials and essential oils was further enriched when the invaders from the north introduced new botanical species from Central Asia.

The development of natural attars, began with the accidental creation of rooh gulab (rose-scented attar) during the reign of Jehangir. His wife, the Empress Noorjahan, loved bathing in a warm bath in which rose petals had been left to soak. On one occasion she noticed an oily film on the surface of the water. When it was discovered that the film had an aromatic quality, further experimentation followed, which lead to the establishment of a process for making natural, floral attars, or distillates obtained by the hydro-distillation of flowers in Sandalwood Oil or other base materials.

Today, as in pre-Vedic and Vedic eras, attars are used in cultural and religious rituals, to enhance sensual enjoyment, and to serve as a therapeutic aid for the treatment of many illnesses. Attars are also used in pharmaceuticals, cosmetics, and sweetmeats, and blended with tobacco and tobacco-based products to heighten their appeal. Of course, attar is most popular simply on its own.

Jasmine was favoured by the King & Nizams of Hyderabad State.